Can You Make Bread in a Pressure Cooker?

This is probably an odd question that only a pressure cooker enthusiast wonders. So call me a pressure enthusiast, I wondered it! And if you did to, I'm here to tell you the answer so read on...

I read a book a few weeks ago that mentioned something about making bread in a pressure cooker. So I had to see if it would work!

I used my favorite, tried and true bread recipe that makes three 1.5 lb loaves of bread. Two of the loaves I made in the oven. And one loaf I experimented with in pressure cooker. I wanted to see first of all if you could make bread in the pressure cooker. And second of all if there was any benefit to doing it.

Here's the round pan that I used to cook the bread in. Nothing special, it just needs to be able to fit inside the pressure cooker. 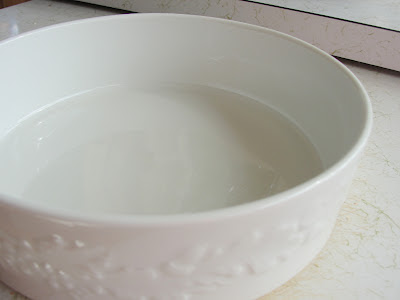 I put in the bread dough into the greased pan and pressed it down. 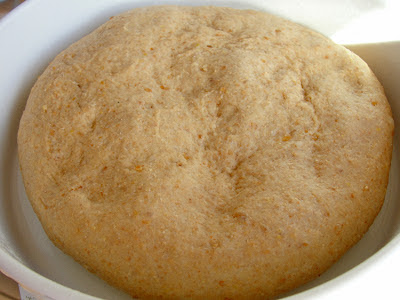 I filled the pressure cooker with 2 cups of water and a splash of vinegar. I've found that adding the vinegar to the water helps so you don't develop a white film around your pressure cooker pan when you cook this. I placed the metal trivet on the bottom of the pressure cooker. Then I made a cool little pan carrier by folding a 1-1/2 to 2 foot piece of tin foil into thirds. 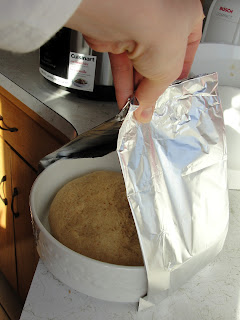 I used that to place my bread inside the pressure cooker and I folded the tin foil down. 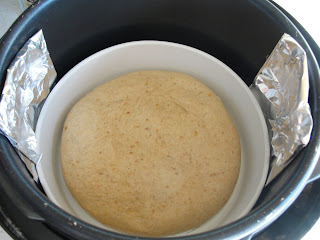 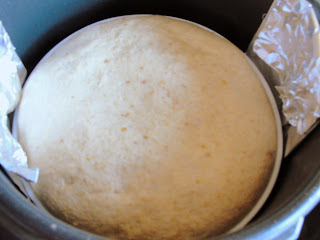 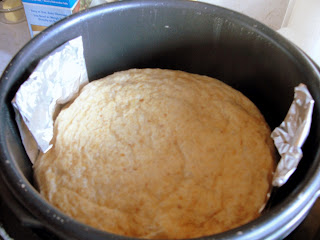 It looked a little strange with a very moist top and I wondered it if was done. But I pulled it out and let it cool just a minute in the pan. 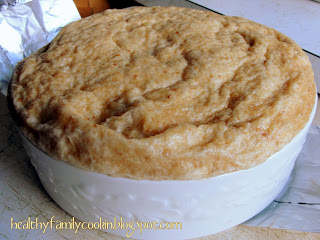 Then I took it out of the pan here's what it looked like on the inside - I was pleasantly surprised! It was completely done, with wonderful texture and tasted delicious! 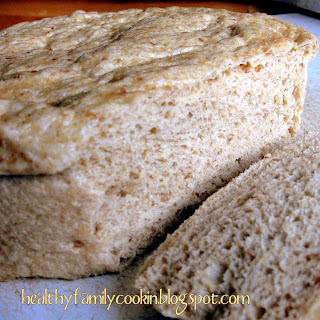 So to answer the first question, I discovered that YES you could make bread in the pressure cooker. It works great.

Now for the second question...is there any benefit in doing it? And the answer is, that depends! Here's what I discovered: 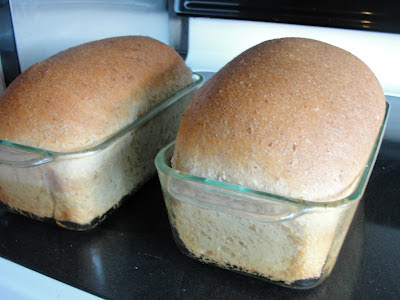 So in conclusion, yes cooking bread in the pressure cooker is possible, but I really don't see myself making it that way on a regular basis and probably not ever again to be quite honest. It was a fun little exercise, and you are ever bored, you are welcome to try it yourself. If you just want to bake it in the oven, I won't be offended! In fact I encourage it! Unless...maybe you don't have an oven and you just happen to have a pressure cooker lying around. Or the other possibility is that your kids don't like crusts. And then you can make 1 loaf for them in the pressure cooker and 2 for yourself in the oven!

Combine above ingredients in Bosch mixer in order, making sure that the yeast is on top of the flour. Mix with the dough hook. Add more whole wheat flour until the dough pulls away from the sides of the bowl. Then mix for an additional six minutes. Divide dough into 3 loaves (the dough will still be VERY sticky - so sticky that you won't be able to form your loaves without putting oil on your hands). In the pressure cooker, you will only be able to cook 1 loaf of bread at a time. If desired, you can cook the other two loaves using the oven method or freeze the dough to cook in the pressure cooker later.

Then make a little pan carrier by folding a 1-1/2 to 2 foot piece of tin foil into thirds. Place the tin foil carrier underneath the round bread pan and use it to place the bread inside the pressure cooker. Then fold the tin foil down around the edges of the bread pan so it doesn’t prohibit the dough from rising.

When it is done rising, turn the pressure cooker on to high pressure and cook the bread for 20 minutes. Release the pressure using the quick release method. Allow the bread to cool. Then remove from the cooker using the foil handle. Slice, eat, and enjoy.

You're ALMOST on the right track.

The answer is... it depends. As you found out, traditional yeast breads do not have any benefits in the pressure cooker.

But look into steam and quick breads. They don't usually have a crust anyway and the steam breads can be pressure cooked in half or less the time. Look into cornbread, or zucchini bread.

I love to read about about cooking experiments - but since I can help a little by pointing you in the right direction I hope your next experiment will be a little more successful!!

Thanks Laura for your comment. I haven't looked into quick breads yet, but I'll be sure to do it after you mentioned your success with it.

I've been wanting to try cake in the pressure cooker for a while, I bet it would be similar to bread.

We've made cornbread in ours and its the most moist and delicious of any recipe even if there isn't much time savings.

I've been a traditional bread baker for over 30 years. I think it is wonderful how you showed all the photos as you went and I think it's great that you shared it here. :) I will say that from what I have read it's very energy saving via the pressure cooker so you have done a good thing. :)

I'm a little confused. You said, "Pressure cooker bread cooks in about the same time as bread baked in the oven". However it takes ~40 minutes to bake a large loaf of bread in the oven and the above directions say to only bake it for 20 minutes in a pressure cooker. So, what is correct baking time?

Thanks,
Bev in TX

One good reason to make pressure cooker bread is not having an oven - and I don't have one on my boat. Somewhere I had seen mention of making bread in a pressure cooker, but your website had the first clear explanation of how to go about it. The pictures helped a lot. I more or less followed your instructions and got good bread that will be easy to cook on my boat. For anyone who would like to see my results, I posted a short article at my website, http://neuseriversailors.com/special_features/bread.html

I just bought an electric pressure cooker an am wondering about cooking pizza in it. My pizza crusts typically cook more on the bottom than on the top and I would prefer more uniformity.

I followed through on my earlier question and made a personal-sized pizza tonight in the pressure cooker! I set it for 3 minutes and let the pressure come down naturally. The vegan cheese had melted into the crust, so perhaps I should have done a quick release. But the crust was raised, moist, and the pizza was beautiful and delicious, so I consider it a success!

Is it necessary to use the tinfoil. What happens if I skip this part.

You have a Cuisineart pressure cooker, I see. Can't tell it's size, but it may be larger (you cook for a family) than my new InstantPot DUO60 (6 qt; inner pot dimensions maybe a sixteenth of an inch more than 8.5" diameter by 6" tall; rack height .75", so about 5" allowable height of loaf, which is pretty tall). Which leaves me wondering the diameter of the dish you used for your bread that the loaf was rather flat. (not a criticism! I want a decent sandwich loaf shape for at least some of the slices.) I'll be using the smaller of the Corning Ware French White round casserole dishes, as the larger does not fit. Its inner dimensions are basically 6" diamenter by 2 3/4" tall. I'm hoping it will deliver a taller, albeit smaller, loaf. The lip of the dish is flared for about half an inch, so the loaf may have a bit of 'mushrooming' at the top (kind of like over-filled muffins). Your breadpan loaves are just to the top of the pan sides! With a nice rounded top. Did you adjust your recipe to achieve that or just luck out? If the Corning Ware doesn't work, I'm looking at a 7" diameter Nordic Ware springform pan on Amazon, whose bottom is apparently 7 1/2" diameter and sides 2.88" high. I've never used a springform pan and am wondering if the sides are in some way clamped into the bottom. It would be funny if the sides rose with the loaf and it also puffed out at the bottom! Or I suppose I could just form a collar of foil taller than the dish sides, certainly for first experiments. Now to find time to DO this! Any feedback you have time for will be appreciated. Nice site. I like your garden.

rams,
not sure if you skip it what would happen. I added it so that I wouldn't get the moisture into my loaf. I was afraid of soggy bread I guess. Let me know the result if you try without.

Martha,
I used that particular dish because it's what I had on hand that would fit my bread and fit in my pressure cooker. I'm sure you could be successful with other sizes as well, but if you go smaller you'll have to cut your loaf size for sure. Good luck and let me know the results of your experiments! 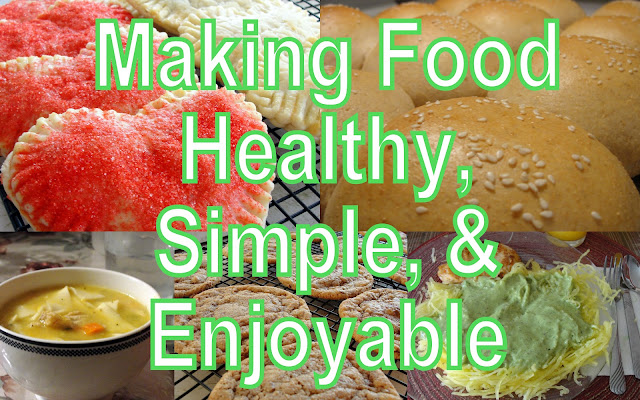 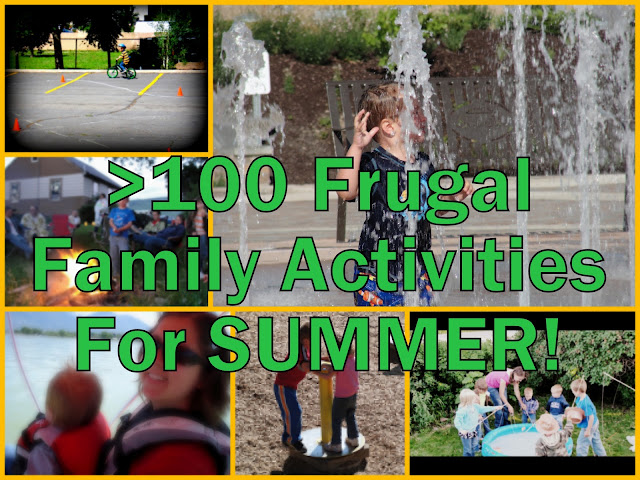 More than 100 Frugal Activities for Summer